Since March is National Women's History Month, what better way to celebrate my lifelong high school friends in this posts #CelebrateOthers! Thankfully, in 1987, the US Congress designated this month for "us" and more importantly, created an opportunity in our schools, our workplaces, and our communities to recognize and celebrate the often-overlooked achievements of American women. I can say with ease that this definitely includes six graduates of the Cleveland Public School System in 1980.

All six of us were born and raised in the city of Cleveland to working class parents, and then as life has it, a few of the girls were raised by single parents (their Dad's died very young), while going to various elementary schools, then the junior high school, and finally, all meeting up at our alma mater: James Ford Rhodes High School on Biddulph Avenue.

All week we laughed and reminisced about how we met (like which grade we were in), the fun and hijinks we had, the teachers (we all had mostly great ones!), and the classes we took, plus the boys we liked back in the day. Music and concerts and ice skating parties were all the rage then, and we took advantage of those opportunities when we could. We've done good, ladies, no small feat for sure!

I would like to introduce you to these five amazing and inspirational women that I've had the honor and good fortune to know for over 40+ years (from oldest to youngest):

Robin Chandler: Robin met most of us at Rhodes (but went to junior high with Sue), and was lab partners with Kata in A.P. Biology. Robin was a whiz at math, and that led her to Case Western Reserve University where she graduated cum laude in 1984 with an accounting degree. She worked in public accounting for a couple of years, then moved on and became the Business Manager/Controller in radio for 24 years. Through those building years, she earned her CPA and MBA, and currently is a CFO at a private school in Cleveland, a position she's held for the last six years. Her favorite color(s) are mauve/coral/pink and she loves nature and animals, especially her dog, Izzy!

Kata Pagon: I/we met Kata in the seventh grade at Charles A. Mooney Junior High School, and this woman is wicked smart! She never got lower than an A, which served her well as she was our class Valedictorian at Rhodes High. Kata was a Ramette (pom-pom girl), plus the president of many organizations both in junior high and high school. Kata also went to Case Western Reserve University and majored in biology earning her degree with the distinction of cum laude in 1984. In fact, Kata and Robin were roommates for their first three years at Case. Kata wanted to go to medical school following graduation, but deferred that for a couple  years to work at various labs (Case Medical School and University Hospital with Dr. Huang) to pay down her undergraduate student loans. By 1988, she was ready, willing and able to attend The Ohio State University Optometry School where she graduated in 1992 and began her 20 year career as an optometrist. She and her husband, Lenny, have raised three great boys (men, really); Nick, Adam and Michael who are 31, 29 and 22 respectively. Her favorite color is blue...


Sue Doerle: Most of us met Susie in the 10th grade at Rhodes because she went to Thomas Jefferson Junior High School. Sue loved to ski and was in the ski club at Rhodes where she gained friendships with Sarah and Debbie on the slopes. After graduation, Sue went on to earn her degree in pharmacy at Ohio Northern University in Ada, Ohio. At that time, the program was five years, so Sue graduated in 1985. I learned this week that Sue loves to work in the hospital setting since it's more clinical and challenging, and she got to live this dream working at the Cleveland Clinic for two years, Kaiser Permanente for 10 years, and Parma Hospital for the last 20 years. She and her husband Kevin raised two boys; Kevin Jr., age 23 and Samuel, age 21. Her favorite color is light pink and she voted for Lynyrd Skynyrd's "Free Bird" to be our class song (did not win).


Sarah Marriott Czajkowski: Sarah is truly a dynamo and loves to be on the go. Debbie and I met Sarah while we were in the third grade at Benjamin Franklin Elementary School, then we all went to Mooney and then Rhodes. Sarah was also a member of the ski club loves music. She continued her education at Miami (of Ohio) where she majored in communications. This helped her with some of retail jobs, and then as a social worker for Children's and Family Services of Cuyahoga County for three years. Shortly after she married her husband, Joe, they moved to Traverse City, Michigan, for three years for Joe's job. They loved that area of Michigan, but Joe got transferred back to Ohio and they moved back. By then, Sarah decided to go back to school and earned her Master's Degree in Education at John Carroll University. Believe it or not, Sarah teaches at the junior high school, Charles A. Mooney, "where our friendships blossomed". Sarah loves spending her free time with her family, especially her two girls from Guatemala; Isabelle, age 13 and Alexandra, age 11. Her favorite color is blue (any kind) and her dream is to live and teach in Paris, France, for one year!

Debbie Martinko: Out of all of us, Debbie and I know each other the longest, meeting each other in second grade at Benji. She was always very nice, but never talked, ever, not even to her family at those younger ages! Funny thing though, she majored in communications at Cleveland State University, graduating in 1984, and had, and continues to have, an illustrious career. Her first job was making tomato baskets since her extended family owned Cook's Greenhouse on Jennings Road (remember those juicy tomatoes?? The BEST!). Debbie has worked at a lot of big and small companies in the Greater Cleveland area including Kurtz Brothers; Fabri-Centers (which is JoAnn Fabrics today); and Food Service Enterprises. She then went on to Public Relations/Marketing jobs at Meridia Health Systems (now the Cleveland Clinic) for 13 years; became the PR Director at Ohio Savings Bank for eight years, and today is the Executive Director for Cleveland's Coats For Kids. She also has her own freelance/writing/marketing business and writes for various publications throughout Northeast Ohio. Deb loves to keep active with travel (to beaches, of course, with her Mike of 20 years), her boxing classes and walking her dog, Clancy everyday...rain or shine (but maybe not snow and sleet...well, maybe on occasion with that), and loves the color "light teal".

Well, there you have it folks! Five accomplished, funny, articulate, and smart women I am blessed to call my lifelong friends! And a huge shout out of THANKS to Kata and Len for hosting this crew!!! 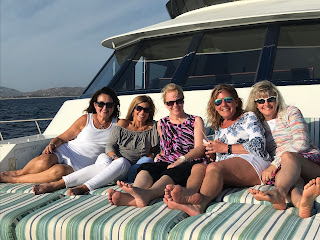 BSoleille! The bright side of friends in their fabulous fifties!
Terri