Infusionarium...A new word in the pediatric cancer world, and Ryan and I were invited guests for the "big reveal" of this wonderful set up at Sinai Hospital in Baltimore, Maryland, this afternoon. The creator of the Infusionarium (and set up in approximately 16 hospitals nationwide thus far) is Co-Founder of Reimagine Well, Roger Holzberg https://en.wikipedia.org/wiki/Roger_Holzberg. We had the chance to meet Roger, plus the donor for this amazing "treatment tool", Paul S. Pariser too.

According to the Wikipedia on Roger Holzberg, an Infusionarium is a "media set up which helps a child with cancer cope with treatment by asking the questions designed to determine what setting would be best and most comforting to them, and then using virtual reality technology and live events, to immerse them in such an environment during treatment."

So if a child would like to go on an African Safari while getting a sack of platelets, consider it done. Cute puppies, kittens and bunnies while getting a long infusion of chemotherapy, you got it. One of the best things about the unit, it's portable, and can be used by several patients at one time. Now that is something to be thankful for!

So a huge shout of THANKS to Paul S. Pariser for having the vision of helping kids in the Sinai community and Dr. Aziza Shad for coordinating all the variables to make the Infusionarium a bona fide "reality." 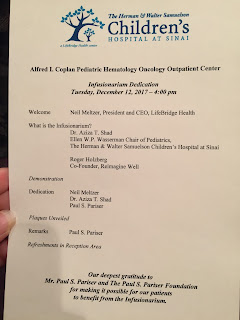 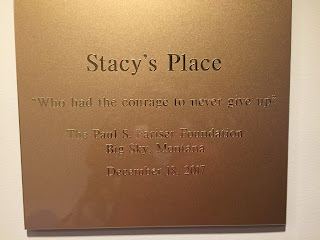 What a wonderful idea. There is nothing more boring then sitting in a hospital having to receive a treatment and not being able to do anything. How marvelous.