A Day in DC 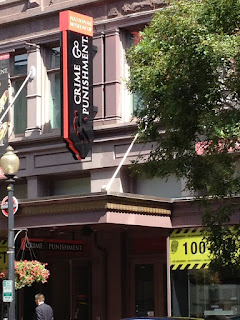 Today I took Patti down to DC for several hours of finding fun and falling into a very cool happening this week at the National Archives. But first we started out at a relatively new museum called Crime and Punishment. There were some great artifacts and neat displays of the good, the bad and the ugly of cops and robbers from the middle ages through today's biggest criminals, We actually learned what an "Iron Maiden" was back in the day and a whole lot of tidbits from Al Capone (he was worth 68 million dollars in 1929) to Bonnie and Clyde to the Unabomber.

Since it was such a nice day we walked down to the mall (lots of construction going on) and then walked through the Sculpture Gardens before walking across the street to the Archive Building. I kept telling Patti how wonderful they have made the displays for the Magna Carta, the Declaration of Independence and the US Constitution and encouraged us to go in. As we reached the Rotunda, we noticed a line and quickly learned that we were about to see the fifth page of the Constitution for the first time on display -ever-to celebrate the document's 225th anniversary. It is known as the transmittal page and signed by George Washington; it describes how the Constitution was to be ratified and put into effect. Today was its last day on display. Very cool indeed!