Scottish Writer Andrew Cotter and his Dogs Save the Day in USA!

Does anyone follow Andrew Cotter and his two labs, Olive and Mabel? Mr. Cotter is a leading commentator in Scotland and Britain for sports coverage: golf, rugby, tennis and track&field. He has worked for many sports broadcasting companies, but with the pandemic, most of the sports he commentated on shriveled to nothing, nada, no sports. But, he has two labs that "saved" him, and a lot of his followers during the early days of the pandemic (and then the rest of the year). His hilarious commentating on his dogs antics has delighted thousands around the world to date. His new book: Olive, Mabel & Me is a best seller. (I have a copy!)

I know it was a tough day for Americans, but when my alarm went off at 7:00 p.m., I vaguely remembered that I had signed up for a zoom call with Mr. Cotter, Olive and Mabel. I wasn't the only one, of course, he also had a slew of fans from around the world on the zoom for a Q&A and discussion about his book. I took a gamble and asked him in the feed if he would ever commentate on an English Premier Game (EPL). My heart fluttered when he addressed me by name and said he loved the name "Terri Tomoff." He said it with a perfect lilting Scottish accent, even rolling the r's in Terri, much to my delight. The answer though, was a definite, "No," for commentating on any "futbol." His love is rugby and tennis.

Mr. Cotter burned the late night oil as it was 1:00 a.m. at the start of the call for him and his dogs (sleeping quite soundly until he pulled out two biscuits, mind you), yet he was enjoying his time with his many followers and sharing tidbits about himself, the writing process, and of course, dishing on Olive and Mabel. He is laugh out loud funny, and just the ticket to "rescue" the day of our newsreels from today.

If you love dogs, or not, but want to tune into his funny commentating on his dogs, most all his videos are on youtube and easy to find. My favorite is the "fetid waters." 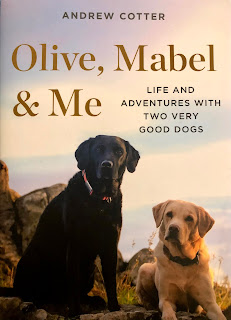 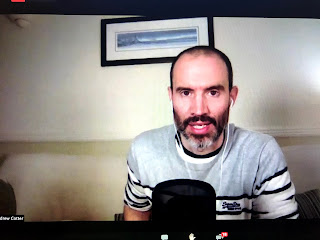 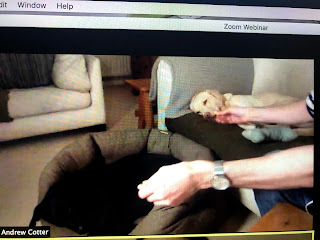