It's been over 25 years that Bill and I were season ticket holders for the Cleveland Browns (split with twin Don), and thoroughly enjoyed many fun years heading to the stadium to cheer them on during a lot of snowy Sundays. All games we went to were in the old Cleveland Stadium right on the Lake, and typically very cold from the winds swirling around inside the stadium (many games at 10 or 20 degrees not counting the wind chill).

As this season progressed, the team was gaining traction in winning games, and in turn, began winning fans all over the USA once again. I thought they would make it all the way to the Superbowl this year, but the KC Chiefs had a great last minute play to win the game and stop the "plan" for the Browns to advance. I guess there is always next year.

If the Browns couldn't win, Chef Ryan pulled out the stops to grill and smoke a delicious meal to go along with the game, and he, of course, won over his "fans." Yummy! 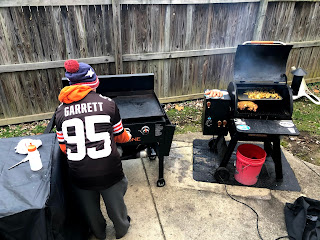