Today is World Cancer Day! It's for the current fighters; it's for the millions of courageous fighters who fought like hell to get to the other side of good health; and it's for the most brave fighters who have lost the fight, but never their dignity, and the folks who loved them fiercely. For the millions and millions of people all over the world who go to battle every day, or caregivers who push and fight with their loved ones - we salute you! BRAVO!

My photo below taken in 2001 is our son Ryan, who was barely seven years old at that time, and "The Best Daughter, who was nine (plus Wally the dog). At this point, Ryan was heavily in the trenches of his first relapse of Leukemia, and the all over body rash seen in the photo was from a dangerous combination of many drugs/chemo/fluids going into his small body. When this crazy reaction cropped up and took over his skin, it was a tough go for a long while (it took several months to finally heal).

However, through all this madness,  do you see his smile? Can you see the love shared between two siblings (plus loving up the pup)? I believe it was Ryan's attitude that made all the difference, plus the cheerleader role "The Best Daughter" employed for years, to get them where they are today. Now that is something to be grateful for - and beyond words to totally comprehend it all.

BSoleille! The bright side of keeping the focus, fight and faith. 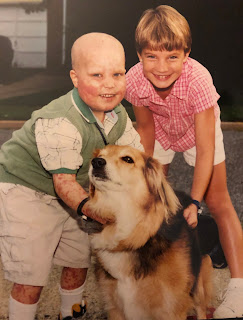