For soccer aficionados around the globe, today's USA Women's soccer 2-0 win over The Netherlands was truly triumphant! You've got to hand it to this team of 23 STRONG in bringing grit, spirit, exceptional skills and a world class coach (Jill Ellis) to maneuver her players in a rotation to optimize the big "W's." This commitment was accomplished over the course of four weeks of play in France, a country that loves their "football."

If you were mesmerized from the opening whistle to the final whistle, you were in good company with millions tuning in to the "beautiful game" the world over. I don't think you can give enough accolades to this team, or individual players, because they all needed to do their part to pull off two consecutive World Cup titles. I believe it was a total team effort, and thankful that The Netherlands played such a well executed game to force the US to take it up another notch for the title.

As you know, the road to victory, especially on this super large stage, is no easy feat (no pun intended). I am just tickled with the final outcome; the polite fans seen in all the stadiums cheering on their home teams; the solid referee crews in each game, and the camaraderie amongst all the teams in the tournament. I think this tournament showcased a lot of positivity, teamwork and optimism on a whole new level in sports.

BSoleille! The bright side of looking forward to what the next generation of women athletes can, and will, accomplish no matter what country they hail from. That will be truly something bright! 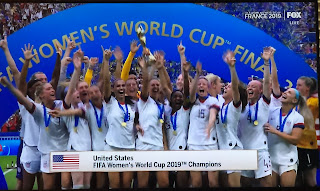