"Throwback" Baseball at the Nationals Game

Today was a great time to head on over to Nats Stadium to cheer on the Washington Nationals, especially when the hottest pitcher in baseball was on the mound this afternoon - Max Scherzer. He did come through with a big win over the KC Royals; 6-0 while wearing the old style Expos uniforms (light blue, like tar heel blue). We had to keep reminding ourselves that the guys in light blue were the home team!

If you follow baseball, the Montreal Expos were the first MLB franchise outside of the US. They played in the National League East Division from 1969-2004, and following the last pitch of 2004, the franchise relocated to Washington, D.C., and became the Washington Nationals.

We were very thankful to take in the game today with the Cleveland Kocan gang and Crofton Tomoff's, despite moving our seats practically 10 times due to the intense sun that followed us (we happened to be in one of those sections). But everyone was very polite about switching seats, or so it seemed to us.

BSoleille! The bright side of summer baseball! 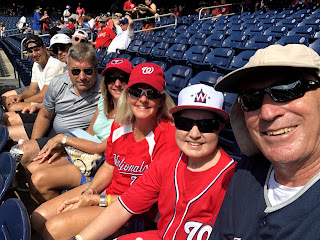