It's a wonderful thing to have a good referral when it comes to house stuff, including a good power washer for very dirty (moldy green) siding. It's been several years since our last cleaning (including the sidewalks and patios); and our previous power washer was hurt in a very bad accident and cannot work any longer.

So have you ever heard of "Nextdoor ___________"? We use Nextdoor Crofton for local news and all kinds of topics specific to neighborhoods (i.e., Why is there police activity two streets over? Or, who can recommend a good power washer, etc.?) If you have it in your neighborhood, you know of what I speak. It's a great forum to find something, perhaps from a neighbor, or someone very close, for just about anything (events, real estate, local crime/safety, lost and found and general stuff).

After getting a new roof this spring, the rest of the house looked quite dingy. But with all the rain, it was not a good time to get the power washing done...until today! Thankfully, I "consulted" Nextdoor Crofton and looked for recommendations from others who asked the same thing this past spring. After reading "reviews", I decided to call Jeff Remy yesterday morning. He promptly returned my call and was "in the neighborhood" to take a looksie at my job request and was at my house in 10 minutes. Due to a cancellation, he was able to do our house today.

This job is not for the faint of heart, especially in the Mid-Atlantic heat, but Jeff carried on without complaint and muscled through six laborious hours of power washing the entire house, windows and sidewalks and patios. While he worked I continually made sure he was staying hydrated and filled up his canister with ice cubes and freshly made iced tea almost by the hour!

Once he finished and cleaned up, he came in to take care of payment, and I decided that this 40 year old young man with five kids would be a great person for a #CelebratingOthers blogpost.

Jeff "Remy" Rermgosakul was born in Maryland to working class parents and has three sisters and two brothers. He said he was raised in Columbia and Silver Spring, Maryland, throughout his youth and graduated high school from River Hill in Clarksville, Maryland (due to redistricting) in 1997. He has been married and divorced twice and has five children ranging from 16 years down to one and an half year old twin girls. He revealed that his children are the best gifts ever and that they make him very happy every day.

Jeff is not one to sit still, and has held various employment opportunities across the board including Jiffy Lube for 12 years; various restaurants in the area for several years (bar manager/culinary manager), and a car salesman (he declared it was the worse job he ever held!). He said that he has always done power washing no matter what job he held in the past. Last year, he decided to take a leap of faith and pursue power washing full time. He does residential and commercial and is quite meticulous in doing a great job no matter where the job is located. In the "off season", he works for a few buddies that have their own businesses, mostly doing HVAC work that he says he enjoys.

What this blue loving guy likes about being in business for himself is that it gives him freedom with his schedule, along with his coaching responsibilities with the Blue Claw Wrestling Club. He loves wrestling and is currently helping coach his 10 year old son in the sport.

Interestingly, he also was involved in Mixed Martial Arts (MMA) and Brazilian Jiu Jitsu (BJJ) where he traveled throughout the USA in competitions and to Portugal for the European Championships between the ages of 21-28. As a young boy, his father took him and his family to visit relatives in Japan and Thailand, and also traveled to Ireland with friends. He said he'd love to get back to traveling, but has family responsibilities he needs to take care of first!

And lastly, when I asked him what he can share with me that no one else knows about him is that he loves to listen to classical music! Mozart and Tchaikovsky are his favorites! Love to hear this for sure! 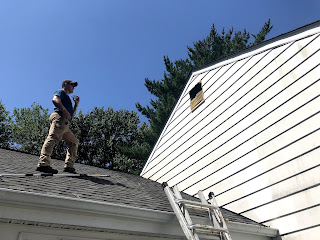 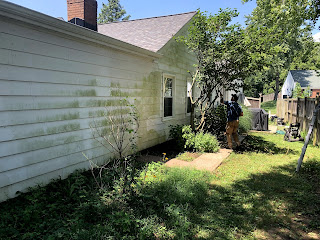 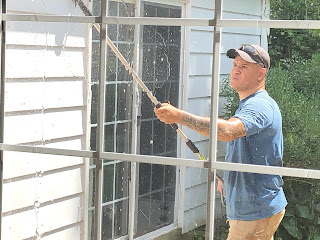