In 2000 I signed up for a year long class with Southern Comforter Guild member, Jean Reager, who began teaching locally the Mimi Dietrich's Baltimore Album Quilt (Mimi is world renowned for her quilts and techniques in all things Baltimore Album). By September of that year, my son Ryan relapsed with his Leukemia, and I became a "Baltimore Appliqué Album Dropout" because I could not finish out the year.

Thankfully, when he got well enough, I was able to return to the class in 2002. I did several of the blocks, but never completed the quilt. Tonight's guild meeting was to show either our BA blocks or completed tops, or hopefully, to inspire others to share ideas to finish the quilts. (It's been way to long, right?)

The bag I keep my unfinished blocks in I made in 2000 at our guild's retreat. To tell you the truth, I haven't opened in over 15 years. It was a treat to open it tonight and see what I actually had in it; the blocks I did really do, but not like so much. I think that's why it was never finished, I simply do not like the colors I chose and everything looks mismatched to me. Other members who showed theirs were awesome, and I hope they will get the inspiration from tonight to get their quilts done.

BSoleille! The bright side of the entire Baltimore Album process...19 years later...and the "need" to get inspired and finish! 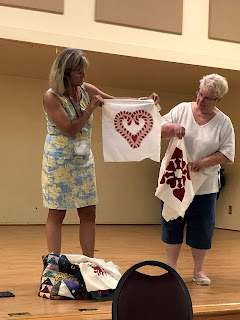 Misty shared your blog with me! I loved it! Love the title! I hope some day you gather these blocks into a special quilt!
Hugs, Mimi Dietrich ❤️