It is truly and honor that I can be on the pitch refereeing a match of soccer with some top-notch athletes; boys and girls. However, since I am so close to the athletes while on the field, I feel the electricity from the players and intensity in their dynamic play. As a Center Referee, one hears the conversations from one teammate to another in the battle to score a goal, or to move the ball up the field, or to cheer each other on with their decisive moves in one direction or another. As referees, we all try to tune out the yelling from coaches or parents, as it is up to each individual player doing their part to make their team the most effective squad that they can be, because, in the end, they are doing all the work.  From what I see out on that pitch, I sometimes think that the play is a kind of an artform, really, even though it's an athletic event bar none.

So from the twack of the ball being swiftly kicked to another player (teammate, hopefully), or the beads of sweat forming around their brows (even in cold weather), I am amazed with the discipline and determination I see on their grimaced faces when these athletes line up and are ready to compete at their highest levels. I'm not sure a coach or parent can see what a referee can see or feel on the pitch, or even know the ferociousness from the 22 players that stand before us for either 60, 70, 80 or 90 minutes (length of game depends on age). And what is most incredible, most players battle wholeheartedly the entire match whether or not their team is winning or losing. It's fierceness from whistle to whistle and never let up; now that is a blessing for sure!

BSoleille! The bright side of team fierceness.

Terri
Photo from the Fulham vs. Tottenham game; London 2019 (By the way, Tottenham won this game in the 93rd minute; a "Disney Goal"; meaning the goal was scored in extra time with seconds left in the match...this team never let up! 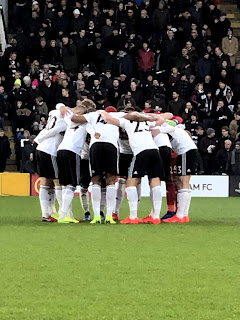