#Celebrating Others with Patti Lane

"Change is good" is the mantra my long ago co-worker, and friend, Patti Lane, uttered quite often while we worked for the State of Ohio's Adult Probation and Parole Authority in Cleveland, Ohio. It is the theme of Patti's life and what makes her so magnificent. We met in 1986 and became work friends immediately, and life-long friends once I left the state of Ohio and moved to Maryland. Patti, married to Mike with a son (Christopher) who is about six months older than Ryan, (they went to the same day care the State of Ohio provided their employees), came to the rescue on several occasions to visit and help us once my son, Ryan, was diagnosed with Leukemia in the fall of 1996.

Patti, now retired from the State of Ohio, is wicked smart. When she graduated college (Miami of Ohio) and began working at the APA, it seemed like she "needed a change", and a good one at that, not long after she started the job. So she took the LSAT, got into law school at the Cleveland Marshall Law School, and fours years later, graduated with honors from the program, and passed the bar on her first try!  Bravo!

Back in the day, Patti was my only close friend who smoked cigarettes. But I never realized what a day in a life of a smoker was like until Patti and I discussed it at great length most recently. Another "change" was that she actually quit cold turkey on 1/31/1999, almost 20 years ago when her son was five years old. She said society was changing and she could not longer smoke where she wanted to (like at her desk at work). She felt, along with many other smokers of that time, ostracized. It seemed like smokers were labeled as a "bad person" instead of a person with a "bad habit". And, most notably, it was a great inconvenience to her and so many smokers on where to engage in their habit.

Patti spoke of the angst she felt every day on where she could smoke, who she could smoke with (or those who did not mind if she smoked), and when could she smoke. The thought process was  relentless and the nicotine causing the addiction became too controlling of her life. She finally needed another "change", and quit as previously stated.

By June of 2010, Patti noticed a billboard on the highway that she drove past daily that said: Boot Camp, and had the address listed (near the exit). She did think "change is good", and everyday she thought about stopping in, but continued driving on instead. Then, on January 11, 2011, as she was driving home from work, she finally decided to walk into that Boot Camp gym, and in doing so, "changed" her life forever. At that point, a barely 5' tall Patti had some extra weight on her small frame and was definitely out of shape. That very day, she met two athletic trainers, Tim and Jason, who were doubly invested in their charges, including Patti, and the goals they/she wanted to accomplish from that very first day.

She worked very hard those first few months at the gym, sometimes to the point of vomiting since she was working so hard to "get in shape". The other "mantra" of; "I can't breathe" , or, "I need water", was answered with "breathe on your own time" and "get a drink on your own time".  Her trainers were inspirational and pushed Patti without judgment and without being "mean". They pushed back on her when she exclaimed that; "I can't climb stairs" or "I can't run". They believed in her and what she could do before Patti believed in herself, because they knew full well she could do it all! I am thankful to report, Patti now is a believer in what she can do too.

By the end of that first year, Patti lost weight, changed her diet (made better food choices as she stated she was always an healthy eater), and incorporated many workouts that included: plyometrics, weight training, stair climbing/treadmill and other boot camp routines. Yoga and pilates also played a large role in who Patti is today.

So not only did Patti use the "change is good" for her own life, her husband and son witnessed the unbelievable transformation with Patti and  made many changes to their own lives as well (Mike started running and runs local road races), as did their son, Christopher (now a marathoner). Patti still does NOT like running, but she will do it kind of "grudgingly". When she visited me not long ago, I did not realize how much she was actually running since I knew she did not like to. So when I went out for a 4 mile run, she said she would start out with me, and then walk. When, after turning the corner after 3.5 miles, Patti was right behind me! I was shocked and thankful that she could keep up (she told me she would not be able to, yeah, right!).

Today, this pink loving lady says her family, friends an co-workers help inspire her everyday. She also started giving back to the program that she began seven short years ago, making a positive impact with other like minded people, or groups of people, in changing their own lives with exercise and clean eating. When she is not at the gym helping others, she teaches part-time at the Police Academy at Cuyahoga Community College, and gets a kick out of introducing family and friends to new adventures she's always got tucked up her sleeve.

Lastly, one big adventure Patti had her designs on when she retired in August of 2017, was to spend an entire month renting an apartment in New York City, and living like a New Yorker. This incredible woman realized her dream this past spring; an unbelievable yet attainable adventure for sure. 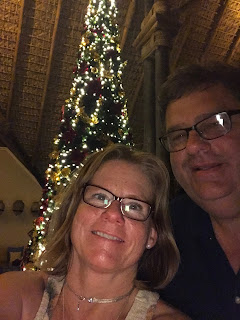