A shining "full circle" moment occurred yesterday while in an appointment with my son Ryan's endocrinologist, Dr. Kaur, of Sinai Hospital. During this scheduled appointment, Dr. Kaur examined Ryan, addressed all his supporting medications, and discussed his chronic endocrine issues that needs attention. Her "doctoring skills" are excellent and very thorough, but it is her bedside manner of kindness and compassion that sets her a part from her peers. And it is in those statements my husband and I wrote a letter of recognition on her behalf to the Sinai Administration after I came home from our summer appointment and reported on what a wonderful doctor we were assigned to for Ryan's Endo issues. This was part of the transition time from Pediatrics to Adult Services.

We thought "nothing" of it, thinking it goes into the big sky (or on someone's desk that never sees the light of day), but, ahh, that was not the case.

You see, Dr. Kaur was indeed recognized for her great care (precipitated my our letter we presume) by the Administration and was awarded a pin for her valiant efforts. But it goes deeper than that.

At the end of our appointment, Dr. Kaur leaned in to me and quietly stated her mother had recently died. I immediately offered my condolences and asked how she passed. She said her mother had cancer and that she had died in India, but had been visiting her in the USA weeks before her death. Dr. Kaur stated that it was our letter and the pin she received that her mother was most proud of her daughter being a doctor. At that moment, I burst into tears because I realized the magnitude of sheer gratitude between Dr. Kaur and her mother, and how we played a small role in this family's well deserved joy!


BSoleille! The bright side of sending a simple letter of thanks.... 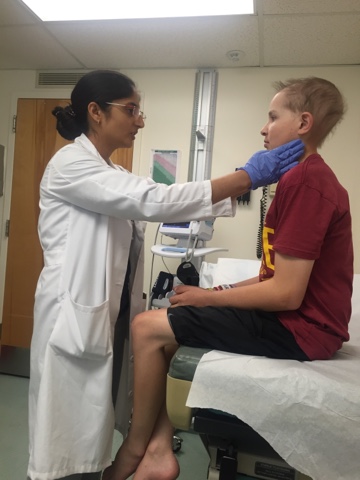 Terri you and your family always know what to say. I'm sure your comforting words and actions helped with a sad period in the doctors life.

Paying it forward, one thank you letter at a time...

Paying it forward, one thank you letter at a time...

Terri, your selfless interest and support of others during your darkest days always amazes me. Praying for Ryan and the medical team tomorrow. Love you girl!