I have to end the week on a "high note" and share a story about the winning Cleveland Cavaliers and a winning bet made last summer. Last August our family went to Las Vegas to celebrate the son's 21st birthday and "The Best Daughter's" college graduation. Unbeknownst to me (until this week), Ryan placed a $10 bet on the Cavs winning the NBA title, which, as you know with great fanfare, they did! So he pulled out his winning prize ticket, now valued at $32! But really, wasn't it the thought that counted when he placed the bet in August of 2015? I think so. He has also picked several winners in the past, including Super Bowl scores and teams, as well as NHL Stanley Cup bouts, but never placed a bet where it counted.
BSoleille! The bright side of a long season bet on the NBA champs of Cleveland, Ohio! 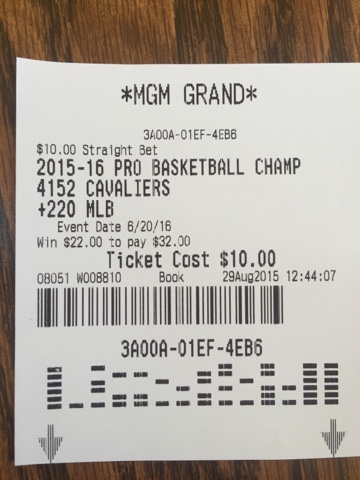