My friends Jodie and Scot Smith have two adorable grandchildren, Isabelle, 6, and William, 1. Their birthdays are in late fall, and I wanted to buy them both presents this year. Although I haven't met William yet, Jodie shares photos of them with me and other friends when she visits them, so like everyone else, we get to enjoy the kids and their milestones via photos or social media. It's all so exciting.

When I asked Jodie what they could use she suggested a few things for me to get. Isabelle was easy because she's school age and inquisitive about life...and loves Barbies etc. But I haven't bought a one year old a gift in quite some time and needed help. Jodie asked her daughter and they came up with the idea of winter clothes...and a cat toy. I was all over some 2T winter clothes, but I was confused about a "cat toy."

When I queried further about the cat toy, I was thinking a cat stuffed animal or something comparable. Initially I racked my brain for a few minutes thinking of cat games or other cat things in the toy isle. But that was not the case according to Jodie. She suggested that I look in the cat isle for a bona fide cat toy for a cat. You see, William loves his cat, and apparently it's visa versa, and according to "legend," he is a sort of "cat whisperer," even at the tender age of one years old. Amazing, right?

However, "his" cat likes to play hide and go seek for days, to a tune of going "missing" for three days in a row! When my gifts arrived at their house, the kids were thrilled to open a few more gifts for their birthdays as you can imagine. Of course, William could care less about clothes, but when he opened up the cat toy, it was magical. He started swinging it around while sitting on the floor, and lo and behold, guess who should come out of hiding and begin playing with William? "His" cat, George, of course.

When Jodie relayed this story to me, I immediately called him: William the Cat Whisperer. I really do believe some people have a way with animals, and this story illustrates it does not matter what age a person it to connect with an animal and share a love language no one else could understand—especially a special cat named George and his one year old friend, William. May they share many happy days together playing with their cat toy (and getting George out of his hiding spots!) 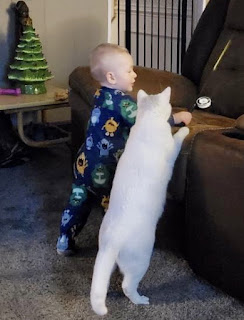