In April of 1996, my husband Bill, his twin Don, and Mark Misencik along with their wives, headed to the 100th running of the Boston Marathon. The three men trained quite a bit together that fall and winter, and qualified the previous fall for the "big race."

The atmosphere was electric and fans lined the streets over the 26.2 miles historic event. Linda, a "non-runner" at the time, was definitely caught up with the fanfare and starting "thinking" out loud that she would like to run a marathon...someday. With a tongue-in-cheek "dare" set that weekend, Linda set out to do just that, to run a marathon. Enthusiastic for Linda to even consider the training etc., I mentioned, ever so softly to the gang, "if Oprah can do it, Linda, you can do it too".

So how does one start a program and become a runner at 36 years of age? One step in front of the other, and NEVER give up the dream, even if that means running between driveways and walking most of the "run", and coming home exclaiming: "I hate this running thing". But what is inspiring is that Linda never gave up, and she experienced some hard days, sore legs and long hours at the office (she is a retired CPA from Nordson Inc.). Previously to this "training", she did dabble in some fun runs (5K's), but never became serious until that fateful weekend. Thankfully, she had a built in coach with her husband, Mark, and they started her program as a team...and you can't beat that!

Linda quickly realized that the more she ran, the easier it got, and she did run that first (and her best crossing-the-finish-line feeling) marathon on November 8, 1998. We were all there to cheer her on, because so many of us knew the feeling of that first one, and there is nothing like it and were collectively excited for her to enjoy that feeling too. Since 1998, Linda has run a total of 15 marathons (and many half marathons, 10k's and 5k's as well). More inspiring than all these marathons, Linda (and Mark) decided to up the ante and "tri", more aptly, do a triathlon.

Triathlons are up on another level entirely, because not only do you need to run, but how about adding biking and swimming to the "routine"? That never daunted Linda one bit, as she and Mark got up at 4am and many days to swim (and when it was light out either run or bike before work). It was a crazy schedule for sure, but she/they plugged on and raised two children to boot! As they continued to train by running, biking and swimming, they met some good folks along the way that encouraged them to do an Ironman. Well, some other good folks would say that stuff is just crazy! And that's not just the race...it's the fanatic training to eventually put all three together to swim 2.1 miles; bike 112 miles and then run a marathon to finish. Yep, you are on the course for alooong time; for Linda, to a tune of 13:49 (that's almost 14 hours!!!)

If you held on to continue reading Linda's story, thank you, but hang onto your hat...because there is a huge inspiring message waiting for me to "reveal". You see, Linda, a three-time Lake Placid, NY, Ironman Finisher in 2006; 2008 and 2010, was unfortunately diagnosed with breast cancer after her 2008 Ironman. One would think you'd hang up the shoes, the bike and the swimsuit, but not Linda. She earned her stripes and was a runner now so there was no way was she going to let this bring her down. In fact, she used this grim cancer diagnosis as a motivator to get well and cancer-free once again, and continued on, not missing one beat.

Linda's fortitude and will of steel goes beyond measure, as when she visited shortly after her surgery, and unbeknownst to her at the time, had a staph infection in one of her breasts (and was in pain). Do you think that would stop this dynamo? Nope, she still managed a 12 mile run because she needed to get her miles in (I ran 6 of it with her), as by this time she was always in training mode, andset her mind on one more Ironman. As I mentioned above, she did run that last one, and, for the record, beat her time by 10 minutes over the "cancer-free previous IM's). Now, that is crazy inspiring for all!

In summary, family and friends, plus travel and "working out" certainly make Linda tick! She says that she is grateful for every day and during the many of her long houred training sessions through the years, used the time to pray, work on problems (spreadsheets from her job when working) and enjoy the scenery on every single mile. Her confidence and the ability to recognize the capabilities of the human body is paramount in getting through some of those long-ago tough days. Mind over matter, don't you think? And the big one....Never give up! Linda says the reward at the end is worth it!

BSoleille! The bright side of celebrating others with Linda Misencik! 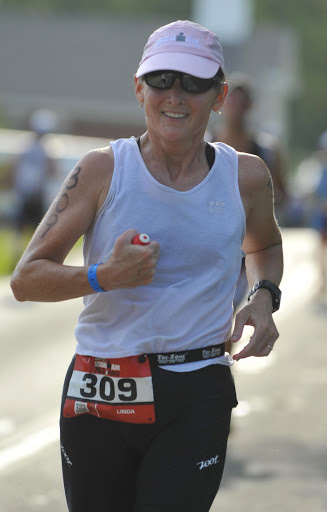 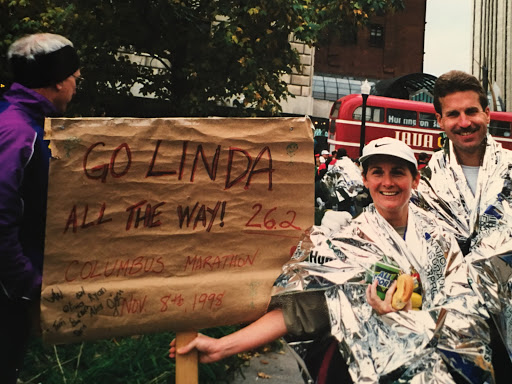 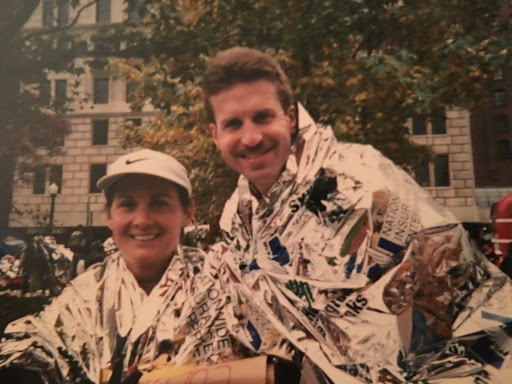 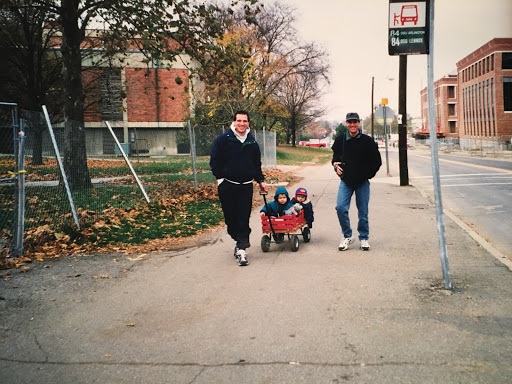 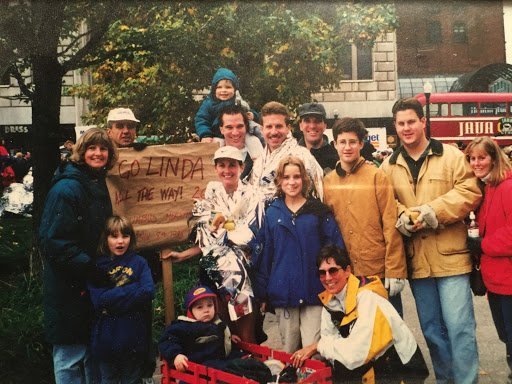