Judith Keane, quilter extraordinaire, is the Southern Comforters quilt guild's Featured Quilter for our 2018 show in March, exactly one month from today. Judith is a very young 77 year old who fell in love with quilting after many years of doing all kinds of crafts such as knitting, crocheting, tatting, needlework and embroidery. She has lived in Bowie, Maryland, for 54 years, and simply loves living, working, shopping and taking classes in her community. She couldn't fathom living anywhere else on Earth!

Originally from Albany, New York, Judith and her husband moved to Maryland in the early 60's. They were married for 18 years and raising three daughters when her husband died in 1979. But what is truly inspiring about Judith, is that she continued raising her three daughters without missing a beat and never remarried.  Her daughters excelled and became leaders in their fields of veterinary (Susan); entrepreneurship (Sharon) and law (Allison). Her family is what makes Judith's heart sing, and now that includes her six "overachieving" grandchildren.

Interestingly, Jackie Kennedy's trip to Appalachia while living in the White House really piqued Judith's interest in quilting. You see, Jackie went to the Appalachia area and bought several quilts from the mountain ladies and brought them back to the White House and covered many of the beds in their living quarters. It was featured on TV and magazines at that time, and Judith was hooked on the quilts Jackie purchased. After the airing, Judith also went to Appalachia to see if she could buy some beautiful quilts like Jackie did, but the prices for the quilts were too much for Judith's budget at the time. It took here over 20 years to finally make her own quilt after taking a class with her daughter Sharon in 1987 where they made Christmas stockings. She joined the quilt guild in 1991 and her quilting skills really took off under the mentorship of member Betty Russell and others. Judith took 18 months to finish her very first quilt, but never looked back, and today she continues to make  beautiful quilts that could be on those White House beds!

Since pink is Judith's favorite color, that color ends up in a lot of Judith's quilts (we have very similar taste in our color choices...including the pinks!). She loves to sew and piece most days because she simply finds joy in the creative process. Judith added that she loves that fact quilts serve a dual purpose with their beauty and color combinations and the fact they keep her family warm!

On many occasions at our guild meetings, Judith entertains the crowd with her funny stories about life and quilting snafus and I always said she could be a stand up comedian. If you are local, and would like to meet Judith and 50 or so of her favorite quilts that will be featured, please mark your calendars for March 10-11th, 2018 at Samuel Ogle Middle School in Bowie, Maryland.

BSoleille! The bright side of celebrating Judith Keane! 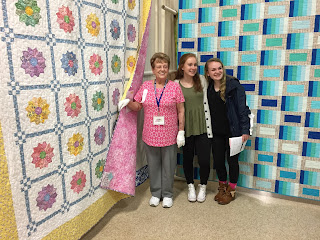 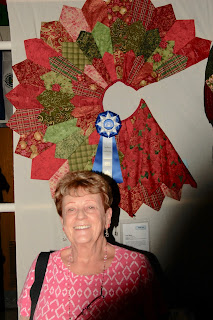