A busy day planned with the "unexpected" emotional toll while visiting Pearl Harbor and USS Arizona Memorial this morning, then ending our day with the physicality of hiking up to the tippy top of Diamond Head. Both adventures, we know, have had millions of people traverse them before us; however, was not lost on us. We were thankful to learn a lot about the surprise attack on Pearl Harbor by an "advancing" Japanese Army on December 7, 1941, which set the stage for the USA to enter WWII  (the very next day) after losing close to 2500 people that day compared to "only" 64 Japanese troops losing their lives in that lopsided battle.

The somber memorial has reopened after repair work was done on their dock to get into the memorial itself (closed in May 2019 and reopened September 1st of 2019). So we were lucky enough to go and see and learn and I highly recommend to go if visiting Honolulu at anytime. Interestingly, they send dive teams down almost daily to record changes in the ships that have sunk, take photos and video of the artifacts found,, and do repairs that may be needed to the memorial at any time. Out of all the infantry men and women who served at that time, our guide said only three remain alive today.

Diamond Head was a welcome hike later in the day when the temperature cooled a bit, and the sun was fixing to set. It was a "short" hike but a bit arduous (though saw many little kids on the hike not complaining) and lovely at the look-out once we reached the top. It was amazing looking down over the crater and into the city and sea - all very enjoyable. 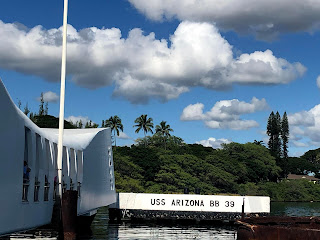 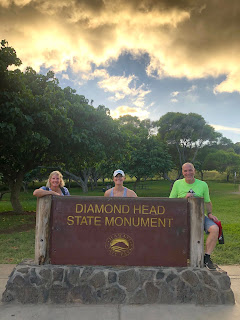