Many people have opinions on everything in life, especially on politics, but not everyone does anything about it. So let me introduce you to my friend, Laura Murphy, who had an opinion and is doing something about it! I'll get to that in a minute...

Laura and I met in preseason for Cross-Country at Bowling Green State University when I was a sophomore and she a freshman in the fall of 1981. With her wild blonde hair and friendly personality, she was instantly likeable by the entire team. Our bonds as a team, and our individual friendships as well, were fostered with each mile we shared in practice, and eventually, road tripping to the meets in the MAC (Mid-American Conference). Laura's tenacity as an athlete came forefront during track season in the spring of 1982, where as a freshman, became the MAC champion in the 1500M run.

That is pretty amazing to win as a freshman, right? Well, this young lady went on to win the 1500M run the following three years and is a four-time MAC Champion! She also earned All MAC honors in 1982; 1983 and 1984. In 1983, Laura was also a member of the MAC CC Championship team and was inducted into the BGSU Athletic Hall of Fame, class of 1992, a well-deserved honor for sure.

After her amazing collegiate career, Laura reached another level as a two-time Olympic Trials qualifier in the Marathon (1996 and 2000). In fact, in 1996 she was also selected as the Michigan Runner magazine Runner of the Year. She continued running and training and represented Hanson's
Brooks at the USATF&CC Club Nationals in Greensboro, NC, where she lead her team to a fourth place finish. She enjoyed a long and winning career on the track and on the road racing circuit, and I am thrilled for all her successes she enjoyed  throughout the years post collegiately.

Laura graduated from BG with a BA in Economics in 1985 and received her Masters degree from Wayne State University in Industrial/Labor Relations in 1993. After graduation she moved to Chicago where her early jobs led her to better business opportunities culminating in working for the Mid-American Regional Bargaining Association, a job where Laura said she learned so much and had a boss who encouraged and mentored her to join professional organizations. It's there she learned to network and work her craft (construction trades; road builders, cement contractors, operating engineers and the like). The longer she worked there, the more she realized the importance of contract negotiations, union work and grievances to hopefully benefit all workers in those fields.

Interestingly, not long after Laura moved to Chicago (1986), she met her husband, Mark Neal, at a party. He was a graduate student at the time at Northwestern in Evanston, IL., and then earned his PhD. After his graduation he went to work for General Motors in Detroit, MI, moving there in the fall of 1989. Laura followed in 1990; and they were married in Rochester, MI, in July of 1991, where they still live today.

In October of 1997, Laura and Mark had twins, a boy, Casey, and a girl, Abbey! Life was busy for them, and Laura said it was best to be home with her children at those tender ages. Never one to sit around, Laura got involved in the PTA; nannied for friends, started a running club when her kids were in elementary school, and was the Rochester College Cross-Country Coach. They traveled when the kids got a little older and even went on a fantastic family trip to Nicaragua!

So what about those strong ideas? Well, we learned that this orange-loving gal who gutted it out on the track and won most of her races; then had a winning streak in her road racing/marathoning days, and that she is easy-going and very likeable, so she took a leap of "faith" in 2016 to help campaign and elect Congresswoman Elissa Slotkin, a Democrat from the 8th District in the State of Michigan. It was her very first experience in any type of politics, or campaigns, or elections. But she was determined to makes some changes in whatever capacity she could, and no matter what side of the aisle one sits on, Laura Murphy took matters into her own hands to try and make a difference! I think that is quite admirable and I am proud to call her my friend!

Currently, Laura is the part-time Oakland County, Michigan Community Liaison and is learning the ropes of Congress through Congresswoman Slotkin on a daily basis.

This past fall, Laura was featured in a Washington Post article during Ms. Slotkin's campaign. Please check out:

In addition to her work now (along with nannying a local Rochester family), she also loves to travel, ride bikes, and kayak. In fact, Laura and I traveled to Puerto Rico last month and had a great time. She was also a part of the South Africa trip in 2015, where four BGSU friends enjoyed two weeks in that beautiful country. And last fall, she and her husband went to Hawaii (she helped Mark measure the Kona Ironman course - he is an official measurer).

Since I'm not one to enjoy the political process (I do vote, however), I am amazed at Laura's high energy in working in her county and with Congresswoman Slotkin and all that that entails. It's certainly not for the faint of heart, and Laura has "proved" in many aspects of her life, that she is one very strong woman who gets things done and keeps her eye on the prize! Bravo!

Photos of Laura and a couple from our recent journey to Puerto Rico and Culebra (she also helped me schlep two bags of quilts to the San Juan Children’s Hospital; pediatric cancer ward: 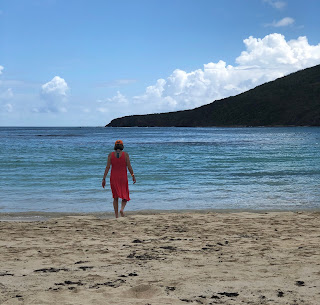 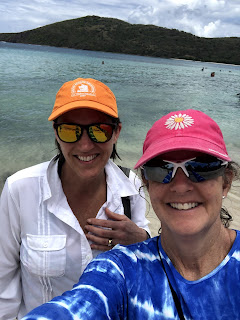 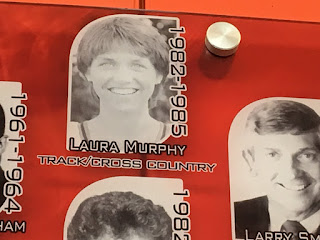