A "temporary" quilt bee was set up at my quilt guild's February retreat in 2014, and named: "Sewfari." I love the name and the quilt we chose to make because another bee was in the process of making the same one, and were making and swapping blocks in their color scheme using tri-rec's blocks. Several of us who formed Sewfari wanted to join in on all this fun! We quickly got up to speed swapping four-patches of bright colors, tri-rec's and tri-square triangles. All those "tri's" play with eye in seeing a few patterns throughout the quilt which make this quilt sing!

If you know a quilter,  you know it could take years to finish a project, let alone multiple projects. For that quilter, though, it seems "just like yesterday" when the project was started.  So now I'm thinking that five years is not too shabby in finishing this "Friendship Star Quilt" (I have several more UFO's and WIP's; that is, Unfinished Objects and Works in Progress) to a tune of about 20-25.

I am thankful to be "almost" finished with this Friendship Star...though it needs borders and those are being auditioned as I write this post. This quilt and many others from the Southern Comforters will be beautifully displayed at our upcoming show next month: March 23, 24, 2019 at Sam Ogle Middle School in Bowie, Maryland. Check out our Facebook page and our website for further information. 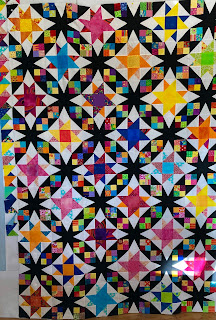 Terri, it's beautiful. I'm heading down to the sewing room to find my parts and get to work on mine. Thanks for the motivation!