Wintertime is a good time to read, yes, but how about binge watching a TV show? This past winter I decided to "binge" watch the show; "Mad Men" and am almost to the end of seven seasons. It was popular from 2007-2015. I never watched one episode while it was on the air during those years, as those were the years my kids were in high school (soccer mom thing) and college. A blur...really.

The beauty of Netflix/Amazon/Hulu etc., is that we all get the chance to tune into a show, and watch, commercial free, for hours if we wish.

I found this show quite fascinating as it's set in the 60's (my young era). The glamorous NYC Madison Avenue advertising agencies were really something back then, and the show depicts the fashions of the day; the Vietnam War, the assassinations of JFK, MLK and Bobby Kennedy, plus the riots and the Beatles (along with all the advertising that went along with so many of the products we all know...and possibly love). Interestingly, the show uses actual footage of those bygone days, and it has given me a nostalgic feeling every time I tune in (plus helps me remember that decade of my primary years).

What about the TV's themselves? Remotes or no? I would have to see a photograph to remember ours during the early 60's, but I do remember that they were big and clunky, and we always needed to adjust that antennae to have a "clear picture."

Photo of a TV from the 60's (I believe we had one that was very similar to this one). 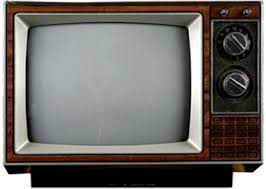