The Grandmother's Flower Garden Quilt was "all the rage" after 1925 using hexagons. Many women who never made another quilt at that time, definitely made this one. The ladies of the day loved all the color combinations of the flowers, and green was often used for the background. Thousands of "hexies" were needed to make a decent size quilt, and it was a matter of pride to parade around a finished quilt of this magnitude because so many of them were hand-pieced which took hours to create! A definite labor of love for some lucky family member of that "quilter."

So, a few months ago, my friends Bill and Colleen Gawne, and Bill's sister, Bobbi, wanted me to finish a Grandmother's Flower Garden Quilt that they inherited from their mother recently. Bill and Colleen want to hand this quilt down to their college age daughter, Jordan, after it's completion. I was giddy with emotion when opening the box and honored to finish this 85 year old quilt in pristine condition (by the way, I waited to open the box with my Just Sew Bee too, so we can all ooh and ahh over this awesome quilt top!).

Blending the old and the new, I used cotton batting which is what they would have used in the 1930's; but "modernized" it by Long-Arm Quilting it. I must admit, it turned out beautifully. I was impressed that all the hand-stitching remained intact with the dense machine quilting I did, and Jordan is one lucky girl to receive a treasured keepsake from her great-great grandmother that was handed down to the women of the family through the years. Very special indeed! 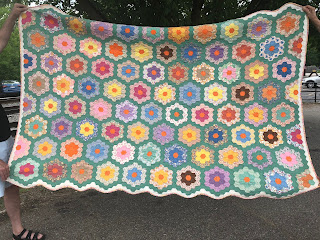 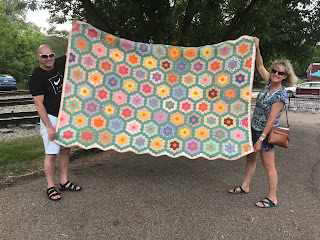