After visiting with the penguins in Simon's Town, South Africa, we happened upon a little souvenir market with an a Capella group sing their hearts out. We perused  the merchandise, but what was so fun was the bartering of the items at hand.  I originally had several little things in my hands (like key chains), and asked about a large hand carved wooden giraffe, which the booth I was shopping in did not have. Unfortunately, they were quoting exorbitant prices on everything I picked up (of course they did), and except for one keychain, I politely put down everything I had, paid for the keychain, and walked back to the car.
It so happened that as I was climbing into the back seat, the young man at the market chased me down to buy the much larger giraffe that he "found" just for me. Once again he started in on high prices (way more than I was willing to pay), and I kept saying "no". Then he got down to my "Bingo" number, and for him, thankfully, I bought the giraffe right then for about $10. I guess I made his day!
BSoleille! The bright side of super glue. My giraffe's right ear snapped off on the flight. It's fixed and looks great!
Terri 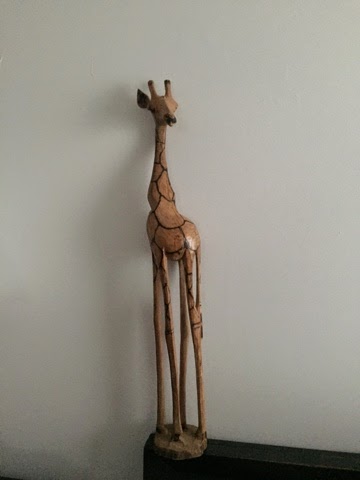