#CelebratingOthers with John Kozlowski - and His "Hidden Talent" with JKSInlays

I am thankful to start my second year of (mostly) Friday blogposts in #CelebratingOthers. This week, I'd like to introduce you to John Kozlowski, 53, who recently gave himself "permission" to identify himself as an "artist" or "craftsman" due to the most beautiful wood creations he started as a hobby not even a year ago (photos below).

I met John and the Koz family in the spring of 2007 when his daughter joined my daughter's club soccer team: The Freestate Phoenix (Pheen). We had an "instant" connection with our Polish upbringing because John grew up with the same traditions as me, though John in Buffalo, NY, and me in Cleveland, Ohio. Both our parents spoke Polish around their respective kids, who did not know the language, of course (this was especially true around Christmas!) but perhaps tried to figure out a wee bit what they were saying at times.

John (who coincidentally as the same initials as JFK) was born and raised by his parents in Buffalo, NY, along with three sisters and one brother. He was educated in the Buffalo Public Schools and then attended University at Buffalo majoring in Electrical Engineering; graduating in 1987. Since jobs were scarce in Buffalo in 1987, John decided to move to Maryland where he landed a government job in IT/Security and stayed on the job for 10 years. He then switched to the private sector (for over 20 years), the last nine years at CACI.

In 1990, John married Angie (met at work), and they have two children, a daughter, 26; and a son, 23. They currently live in Ellicott City, Maryland. When I asked John what makes him "tick"; he replied being a good husband and father and supporting his family. John certainly has done that and so much more (he has a lovely wife and great kids...just saying!) So, when I asked John what was the best gift he ever received, John replied that meeting and marrying his wife Angie, and having two children together has been the best gift ever!

Lately, John is totally inspired by his woodworking and the fact he is making something tangible with his hands. He mentioned that he has never been the "creative" type, but from the looks of his work, and the fact he can figure out the equipment to work on his projects https://foundery.com/, he is doing fabulous work! (That engineering degree is still paying dividends...)

John added that woodworking, and working with all the very expensive, but fun, equipment at The Foundery certainly gets his creative juices flowing. It's really an outlet from his day job as well. He also has plans to investigate "all" the other equipment in the shop because he is interested in a lot of the trades "offered" and the craftsmanship that goes with each one. As one can see, John likes to be handy, and it was his father's handyman skills that piqued John's interest from a young age, and now, parlayed into a great hobby today.

Lastly, John revealed that The Foundery in Baltimore, Maryland, is a Maker's Space and a growing trend of a "community share" where there are classes in woodworking, metal arts, CNC machines, blacksmithing, welding, powercoating, and embroidery. He even said there are a few guys who are managing a furniture business right out of that shop! But check it out if you are local, and if not, there is probably something like The Foundery in every big city.

To check out more of John's work, check his Instragram -  JKSInlays or he can be reached at JKSInlays@gmail.com

Photos of John's work below: 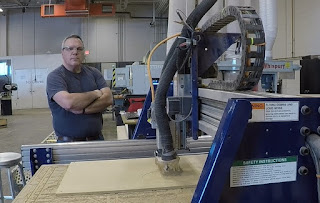 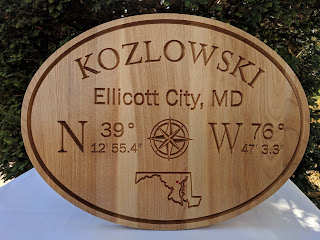