A week ago, the Maryland Soccer Referee Association threw out an invitation to attend a training session (six hours) with US Soccer Referee Mark Geiger, a New Jersey native. He is fresh off the World Cup pitches in Russia and had lots to share in this informal gathering of Maryland Referees at the Johns Hopkins APL in Columbia, Maryland. This MLS Ref of the Year in 2011 and 2014 gave the crowd of 75 eager soccer referees (or AKA serious fans of the beautiful game at the highest level...World Cup), the "ins and outs" and "ups and downs" of the 2018 Tournament. He started out his World Cup introduction with a quiz, typical of a former school teacher that drew the crowd into his discussion the rest of the day.

I was tickled beyond words in gaining Mark's insight of the game, especially the three games he refereed during World Cup play; 6/20 - Portugal vs. Morocco; 6/27 -  Korea vs. Germany and 7/3 -Columbia vs. England (R16); plus five VAR and three AVAR3's.

Some may wonder about the "new" VAR system and if if affected the tournament. Here are the answer(s): 99.3% accuracy in decisions through the group stage; without VAR, the same 16 teams out of the group stage would have advanced...in only 1 group would 1st and 2nd been reversed; and Referees who initially made incorrect decisions were still "eligible" for later matches.

When the VAR worked, it worked!

I was honored to attend this session and totally impressed with Mark and the entire session. We all learned a lot; and it's not easy to become a World Cup Referee or Assistant Referee, believe me. They are fit and have keen insight into the game at every level. Other "interesting" stats: in the 64 matches played there were 219 yellow cards awarded and only 4 red cards for the entire tournament. Now that is some mighty fine 'controls' on the game one could say.

Lastly, Mark Geiger has been a PRO Referee since 2013, largely giving up his teaching career, and has gone further in World Cup than any US Men's Referee before him. He's blazing a path for others to follow in his footsteps from this neck of the world to succeed at the highest level! And I had to ask him in the Q&A what his favorite color jersey to wear for a match; his answer was black!

BSoleille! The bright side of a World Cup Soccer Recap with none other than Mark Geiger! 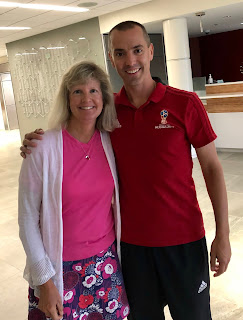 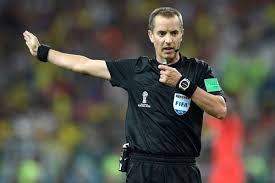