According to Faith Hill's song, "The Secret of Life"; it's "a good cup of coffee". For dynamo Julia Hawkins of Baton Rouge, LA, and 102 years young, being active is her "secret of life." I met Julia last month at the National Indoor Track and Field Championships in Landover, Maryland, where she competed and won two gold medals in the 60 meter dash and the discus. She currently holds world records in the 100M dash, the 50M dash and the 60M dash. She is about 4' 10" and maybe a 100 lbs.

What an inspiration she is to a whole new generation of runners, and non-runners alike, with her gumption of defying odds and winning track and field events over the last 2+ years. I was smitten with her upbeat attitude and got to talking to her because she was sitting right behind me while wearing her medals around her neck like two big necklaces when I struck up a conversation. Fascinatingly, she only started running two years ago, when she was 100, because before then, she was a cyclist since her early 80's. She has been competing in Senior Olympics for over 20 years, winning mostly gold medals in her age group, but has one bronze that she is not too pleased about (she should have won the event she lamented).

When I asked Julia about her "training regimen", she replied she does not have one...except for working in her yard, being active all day, and taking care of 25 bonsai trees that has turned into a "full time job". Widowed now, she was married for 70 years to Murray, who served as a Naval Officer in WW11 (and was in Pearl Harbor when it was bombed), and later, a professor of petroleum engineering at LSU. They both attended LSU and met the first day they reported for class. They had four children; two boys and two girls who are now between 64-72 years old. In fact, it's her two sons that encouraged Julia to participate in the Senior Olympic Games and other competitions from cycling to her running events today. Interestingly, she has been highlighted in several magazines, most notably one article in Runner's World and four articles in Sports Illustrated.

Julia was born in 1916, and by the time she went to college and graduated, teaching school is what she chose to do (not many options then) for about five years before raising her family. Prior to marriage and family, she taught school in Honduras and was a counselor at summer camp her parents owned in New Orleans, LA. She has had quite a life, and once again, her children encouraged her to write a memoir about her life: https://www.amazon.com/Its-Been-Wondrous-Memoirs-Hawkins/dp/1540770796

This lavender loving spitfire also loves salads, crabs and popcorn; which I think is just perfect for any 102 year old athlete in 2018!

BSoleille! The bright side of being 102 years young, Julia Hawkins style... 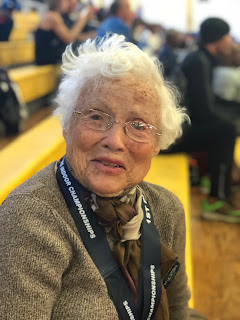 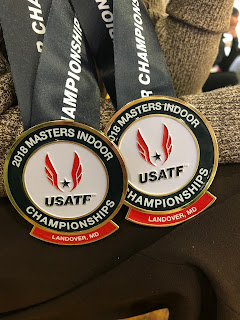 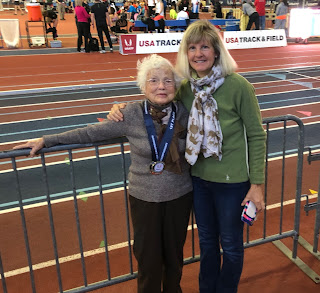