Thankfully, about 25 million people tuned into the USA vs. Portugal match (tie) this past Sunday with its twists and turns and unbelievable finish (by Reynaldo)!  Not sure how many watched today's game (loss) vs. Germany, but it was still very exciting even though it poured buckets of rain throughout most of the match. Commentator, Ian Darke, claimed the game was being televised to 400 million viewers world wide!  Whew, I am so glad Team USA "squeaked" by to the knock out rounds. They truly earned their bid!
Did anyone else see "the bite" by Luis Suarez of Uraguay?  It was unbelieveable as well. Though he did not get tossed (should have been a straight red card) during the game, enough flack was brought to the attention of FIFA that he's banned from further play this tournament and for the next four months. Good call! He was playing just as poorly (though no biting) in the group rounds as well and could, er, should have been sent off in each game played!
That's it for now!
BSoleille!  The bright side of the beautiful game in Brazil!
Terri
Photo at Houlihan's with Eileen Cortese and Christine Ghardi watching today's game (had a crab cake!) 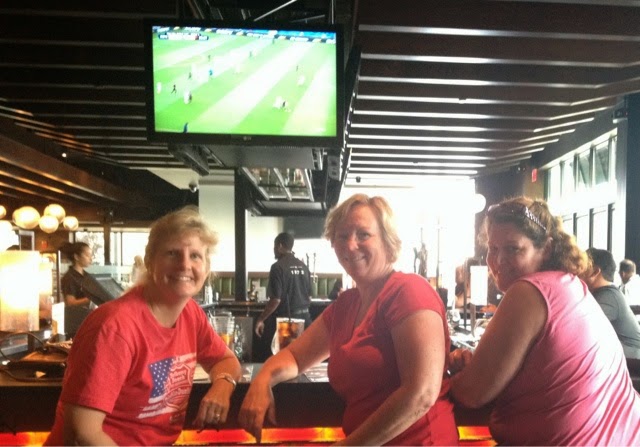