Last fall I watched the entire series of Friday Night Lights on Netflix. This past fall I watched Glee through the end of season 4. It is currently in season 5 and I still need to catch up. But for now I'm done with it. So this past Sunday I was thankful to talk to one of the cast members of Glee, Telly Leung, who played the part of Wes, a Dalton Warbler! He attended the Georgetown Jingle and did some Master of Ceremony duties, plus some singing (he is really good). He was a delight to talk to and gave me some insight on the show, the characters and the actors. One interesting tidbit he shared was that the Dalton Academy used to be an all boys school in Pasadena, California, and that the setting used for filming was an old Red Cross Building no longer in use. Cool stuff!
BSoleille!
Terri
Photo of me and Telly 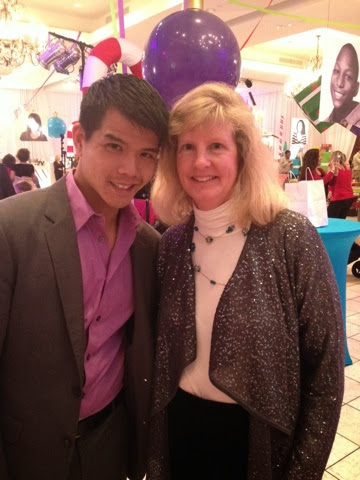