It was an awesome treat to connect with my first cousin Larry Piecuch. Through all the years I thought he was the eldest from all my cousins on both sides of the family (my parents married late and both were the babies of their families.)  Nope, not even close since our cousin Delores beats him by five years and is 86. Larry is my Aunt Mary and Uncle Mike's eldest and born in Cleveland, Ohio in April of 1939 (I'll do the math, he's 81.) My Aunt Mary was one of my Dad's sister's, and Delores was born from my Dad's eldest sister, Aunt Lottie (her Polish name: Władysława.) Larry's siblings include: Loretta, 78, (living in Louisiana had has three sons and many grandchildren) and Edward, 66, who lives in Cleveland, Ohio.

Larry and family grew up on the East Side of Cleveland (E. 123rd and Superior) before moving to Cleveland Heights and then East Cleveland. He graduated from Cathedral Latin in 1958 and loved everything about his experience there. He then expressed a wonderful childhood, and was lucky to know my grandparents (they had died before I was born), who opened a butcher shop on Trumbull Avenue. He mentioned he spent every summer working with them and learning the ropes of butchering and using a smokehouse to make the best Polish kielbasa and meatloaf in a tri-state area. He said it was very interesting in making the meats by using a special shed and huge stainless steel drums. Larry was impressed that my grandparents kept all their equipment spotless (think: clean like a hospital.)

If Larry wasn't studying in school, he was practicing his skills on the accordion which he also loved to play. He was the life of the party playing polkas and obereks and delighted his parents and family, especially during the holidays. He also delivered the Cleveland Press Newspaper, and picked up a few shifts from the local Pick-n-Pay grocery store when he could.

After graduation he worked in my Uncle Mike's (Larry's dad) furniture store in sales and in making furniture as well. They had a huge clientele back then, and made everything by hand (and it was very hard.) At one point, my uncle had 35 employees in the furniture shop because they made in furniture for other shops throughout the Cleveland area. My dad took me to my Uncle's shop on many occasions, but I do not remember the "sweat shop."

Not too long after graduation, Larry met the love of his life, Marsha, at Manners Restaurant in South Euclid. He was with his best friend, Ted Vandemotter (whom he met in third grade, and believe it or not, are still best friends today!) Marsha was with a car full of girls, and someone mentioned to Larry her last name but he didn't get her number on that initial meeting. So, what would you do if you had an instant attraction like Larry did? Well, how about opening the White Pages and dialing every Krebs in the book until he found the correct house she lived in! Talk about persistence (Larry said there were quite a few Krebs in 1958/1959 phone book. When Larry hit the jackpot on the right house, Marsha's mom answered the phone and told him the exact address where she was at that time. Within 10 minutes Larry and Ted met up with the girls, and the rest they say...is history!

They dated while Larry entered the Coast Guard as a Reservist and did a six month active stint on a ship docked in Bermuda (after boot camp in Cape May, NJ.) He was discharged from active duty in 1961 but served a total of eight years.

Larry, who said that my Dad was the single most person who changed his life, began working at the same company as my Dad in 1967 - National Acme on Cleveland's East Side - as a machinist. At that time, the machines were run two shifts a day, my Dad worked first shift, and Larry, using the same machine, worked second shift. This allowed Larry to continue at the furniture store until he went to day shift at Acme. Both my Dad and Larry loved their jobs (Larry emphasized that it was the best job he ever had!) and worked in an area of the shop called the "Thread Mill." Fifteen guys worked those machines putting threads on all the parts that came through their machinery.

As the industry began to wane, Larry said he was blessed to work at National Acme for 31 years in the "Thread Mill." He then went to other tool and gear manufacturing places for another six years until he fully retired.

Always a car lover, Larry (and Marsha too) love the Corvette. He said he loves everything about this iconic car and has owned several over the years. They currently have four: a 1962 white one with red interior (1st Anniversary present to Marsha); a 1969 green convertible; a 1975 red convertible and the 1978 25th Silver Anniversary model he likes best and drives the most. He keeps them all in impeccable shape and loves to hit the country roads on nice days to keep them humming along.

Larry's favorite color is red and his favorite song is the Julida Polka https://www.youtube.com/watch?v=d8h-vw5U3Es His guilty pleasure is chocolate candy, and cars make him tick! Larry's superpower is that he is a good handyman, and if he could have any talent in the world, he would have loved to have been a professional baseball player. His bucket list item...of course has to be a car... and that would be a '57 Chevy convertible either in red or black.

It was great catching up with cousin Larry and getting some "backstory" on my grandparents and aunts and uncles, along with his life with Marsha and a life well-lived.

I loved it when I asked him his favorite quote, which I think is by him; "If you can read a book, you can do anything." Isn't that the truth? 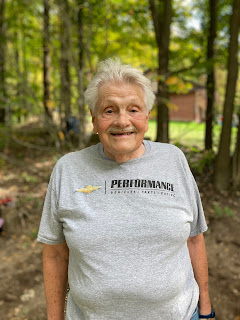 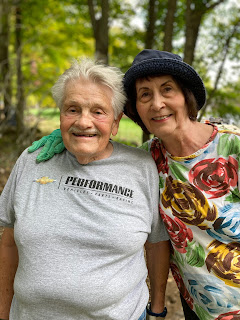