The National Gallery of Art has two worthy exhibitions to see at this time, and I am thankful "The Best Daughter" and I got down to DC to take them in today.
El Greco had one fantastic gallery of both small and large paintings that leaves one speechless.
And Edgar Dagas "Dancer" was terrific to see "in person"; quoting from the museum:
"Now adored, this original wax version of Edgar Degas’ Little Dancer Aged Fourteen was reviled by most critics when it was shown at the 1881 impressionist exhibition in Paris.  Art critic Elie de Mont was flabbergasted: “I don’t ask that art should always be elegant, but I don’t believe that its role is to champion the cause of ugliness.” The diminutive figure, the only sculpture Degas exhibited publicly, was described variously as “repulsive,” “vicious,” and “a threat to society.” Modeled in colored wax and adorned with real hair and a fabric costume, Little Dancer decisively broke with 19th-century academic practice by introducing unusual mixed materials and frankly representing a provocative modern subject; Degas added to the controversy by exhibiting it like an anthropological specimen in a glass vitrine."
Both Olivia and I thought it was great, and I really liked how the sculpture looked from the rear angle as shown in my photos today.
BSoleille! The bright side of "cool" art! 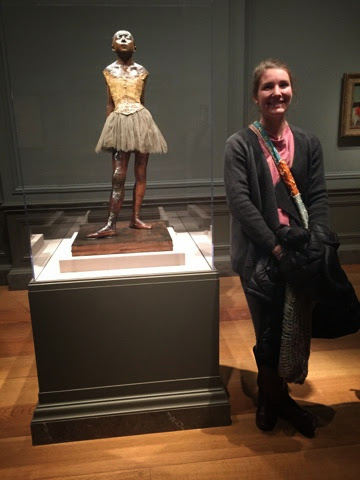 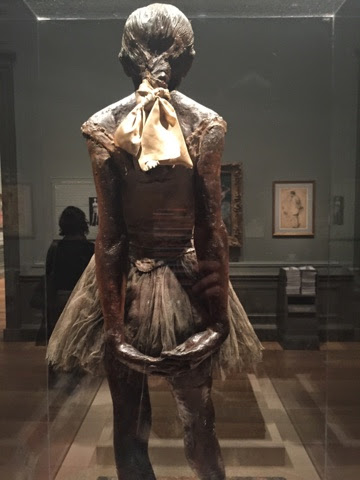