Self-Publishers Wear all the Hats!

When my editor Linda Blachly, of The Focused Fight, came over for a visit the other day, we had lots to catch up on with our lives since the book was published. She had let me borrow a few of her books on various subjects that I wanted to return to her, and my author book shipment arrived to give her a few. Ryan (my son) and I signed copies for her to take home and share with two other beta readers she knows and lives close to. A win-win!

My husband couldn’t resist a photo op and led us outside to take the photo below! WE did it!

We met Linda over 20 years ago when she called us out of the blue to do a story on us for the now defunct Crofton News Crier, about our family and Ryan’s earlier stages of his cancer journey. She happened to be near the fax machine (remember those?) when a press release came in from a cancer organization called: Special Love, Inc., stating something to the effect that this local family joined Special Love.

I’m glad we said "yes" to her as she went on to write a series of articles in the ensuing years. Linda then won an award in the state of Maryland for small newspaper reporters doing human interest stories.

Late last summer I contacted her to see if she could read over what I had written up until that point. She was elated. When I called her and explained what I was doing, she said, "sure." Linda then became my structural (sometimes call substantive) editor, and also did some line and copy editing. It was exactly what I needed then!

I cannot thank her enough for all she did to help me with the book, but her friendship and grace is the most important thing that came out of the entire process! I am over the moon. 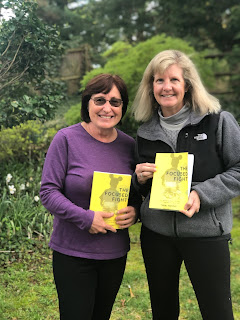