A big wind and bright sunshine were a decent combo to referee a couple games of soccer today.  Originally I had four games scheduled this afternoon, but once at the fields, the third game got cancelled (the fouth game was cancelled midweek).  I'm thankful that I will get paid for the third game though, as it was a long drive out to Western Regional Park in western Howard County, Maryland (beautiful grounds and fields, I may add).  The U14 Boys set was quick and fast and the crew I worked with was fun!  Tomorrow I'm working a few games of U16 and U19 Girls in my county, still a part of the Columbia Memorial Day Soccer Tournament.

I am going to add one more note to this post (I promise it will tie into the above paragraph):  I just started wearing my Nike Fuel Band once again after a long hiatus of not wearing it due switching out a couple of broken ones.  I finally set up the new band and have been wearing my new one for almost one week now.   Knowing full well that I wanted to run as much as I can while on the pitch to maximize "fuel", I have to say I am retiring the day with 4900 "fuels"!  My goal for each day is currently set at 3000 "fuels", and I hit that as soon as I was done with the two games.

Photo: Our two pups not getting any "fuel"; only "rest". 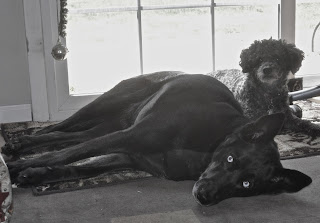