It seems like the whole world is missing something while we are social distancing, and in a lot of places, in isolation or quarantine. So many things have been canceled or will be canceled in the upcoming months that is truly disappointing for millions: high school and college graduations, weddings, and the heartbreaker, funerals with loved ones. There is not much we can do except ride out the virus and the unknowns...which is "crazy" as we all know.

For me, my quilting/sewing and scoots around the Crofton Parkway, along with some yoga thrown in the mix, has sufficed during the last seven or eight weeks. What I've really noticed, however, is the amount of "added hours" of time I have gained without refereeing soccer on the weekends. I guess I never realized that refereeing 10 games over a Saturday and Sunday, and even some weekday games, gobble up quite a lot of hours. Since it never seems like "work," the hours and the great games on the pitch typically fly by for me.

Lately, my appetite for "the beautiful" game has been whetted by a simple show. I must give a shout out to bee-mate, Karen Todd, who suggested to watch the Netflix drama miniseries; The English Game, because she knew my love of soccer, and therefore took up her advice and watched it over the last few nights. A period drama certainly, but if a soccer fan, it's a must see on how the game evolved in England dating back to 1879. I would like to think this miniseries somewhat was depicted as the precursor to the English Premier League that's been around for at least 100 years.

BSoleille! The bright side of blowing my whistle again on the pitch... someday.

Photo below was when Bill also refereed! 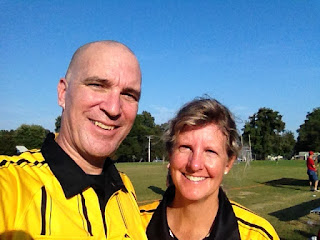