Today I took my son, Ryan, to a benefit in Laurel, MD, for a fund-raiser to support Late Effects of Childhood Cancer and MS through the Hockey4Hope.  Former NHL Capitals Alumni played against the U.S. Secret Service Hockey Team; U.S. Naval Academy Alumni and Firefighters/Police!  It was a fun day, and Ryan was prepared to have some of the former Caps players sign blank hockey pucks (he bought a dozen yesterday for the occasion!)

My photo today is of Ryan and former NHL player (and Caps player) Joe Reekie signing his puck. 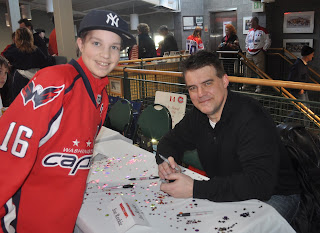