A depression baby (youngest of five) born to immigrant parents from Poland, Zosia Borkowski made her way through life in Cleveland, Ohio, (not always easy) as best as she could under whatever circumstances were thrown at her. She gave a valiant fight through dementia for the past 12 years +, and then six days ago, tested positive for COVID-19; not a good combination to have for anyone.
Now, here is where the "rubber meets the road." Due to my mom being transferred from the nursing home where she spent the last 9 years on that long road of decline with dementia, and in lockdown (no visitors...AT. ALL), she was transferred to another nursing home with an entire COVID unit, and once again, NO VISITORS allowed unless a "thousand" page waiver was signed...ahem. Since that was not going to happen, we had to share our concerns (maybe construed as begging?) with the nursing staff (very accepting, thankfully) on holding her hand and whispering in her eye how much we love her throughout her very short time there.
The heartbreaking thing was that due to all of the above, and the state of the entire world, at the very end of our loved one's life, we could not be there with her for us to hold her hand and whisper a prayer of God's mercy in her ear. I must add, though, once my/our mom passed peacefully, with a great nurse at her side, she called us immediately, and through tears, told us she was sorry. I replied back with sincere gratitude and that she was a "stand in" daughter for all three of us and our entire family. The poignant moment was never lost on her or any of us.
At 88.5 years old, Sophie was still tough as nails and her strength was beyond measure (she once lifted a car to save one of her nephews life back in the day); a Girl Scout co-leader, and a friend to many.
She loved her family and loved to cook big Polish dinners, especially during the holidays. She was a bowler (until she fell down a step and shattered her elbow); an excellent crocheter (she did not wing her stitches like me!), loved reciting the rosary and going to Church.
Living a long life as she did, despite her medical challenges, afforded to see her three daughters grow up and marry, and truly loved being a grandma to seven grandchildren (six boys and one girl).
She had a big heart and even kept a positive attitude in assisted living, and then in a nursing home, which was not easy feat.

Sophie/Mom/Grandma/Auntie will be missed dearly by many, but her legacy and that Polish strength that served her well her entire life will live on in her daughters and grandchildren. God Bless you, Mom. RIP
BSoleille!
Terri
Photos from the family - below from circa 1973 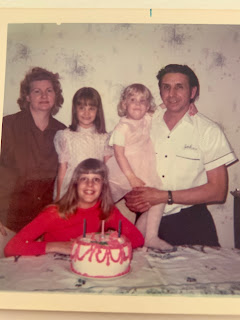 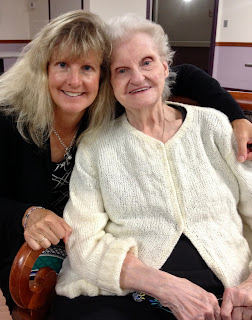 Posted by Terri Tomoff at 11:26 PM No comments:

Today was our first time back to a hospital clinic visit (scheduled) after several telehealth calls (since earlier this year), and Sinai Hospital in Baltimore, Maryland, is kickin' it! They were so efficient in how patients (and a loved one) enter the hospital (with masks), as well as a few health questions and taking our temperatures - that it all felt just right. We then walked down a few hallways and entered the Hem/Onc clinic and were quickly ushered into a sparkling clean exam room that was ready for Ryan.
Labs were drawn, medication rundown completed, and Dr. Shad performed a very thorough physical exam that we were on our way with a good report in no time. Efficient and quick!
We never take these days or these medical appointments for granted. We are very thankful to all the medical staff in staying the course, keeping their patients in good standing, and all the while with a smile and upbeat attitude they all seem to muster day in and day out! Thank you ALL!!!
BSoleille!
Terri 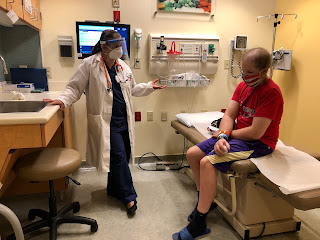 Posted by Terri Tomoff at 11:29 PM No comments:

I've never met a pool that I didn't want to swim laps in, especially on hot summer mornings. Thankfully, our pool has early morning lap swimming times (first session starts at 8am - and I am in that first session), but next week, they are offering 7:00am swims! I'm not sure about that time, but it will be good for some of our members I'm sure. These sessions are 30 minutes long to maximize the membership in taking advantage of the lap lanes, and the "regulations" on how many can show up at each session. So far I am pleased how everything is working with the sign ups, and even more pleased with jumping into the water, starting down a lane (freestyle) and thoroughly enjoying the water washing over my shoulders with each stroke I take!
BSoleille! The bright side of being a summer lap swimmer...
Terri 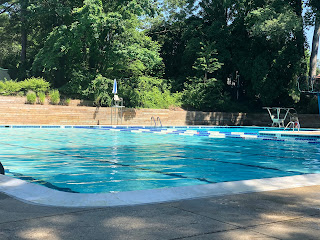 Posted by Terri Tomoff at 10:45 PM No comments:

My "kid" sister, Kimberly, is also a quilter, and a very good one at that! She certainly has her own style and loves the soft colors and does beautiful piecing (meaning her sewing skills are excellent and her points match - but we have NO Quilt Police - ever!) Sew, while here on the holiday weekend, Kimberly brought this quilt top for me to Long Arm quilt it, and I did! It turned out awesome, and I even put on the binding for her to she could go home with a completed quilt for her enjoyment! How's that for a holiday treat?
BSoleille! The bright side of "Cheerio!"
Terri 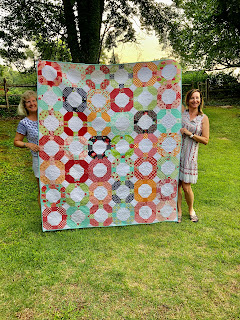 Posted by Terri Tomoff at 2:00 PM No comments: 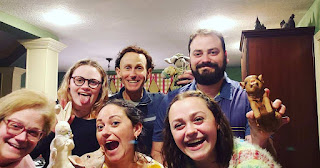 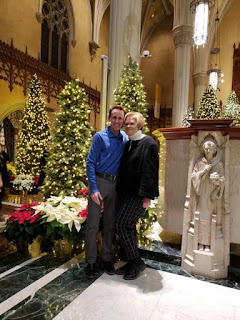 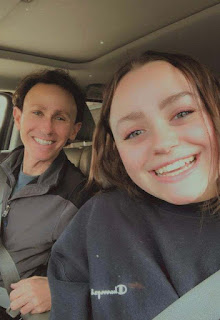 Posted by Terri Tomoff at 7:34 PM No comments:

Maryland Crabs on the Fourth!

Those who live in Maryland, visiting or are familiar with Maryland Crabs certainly know the delicacy that they are, and, of course, loved by many. They are especially great on a hot day, not only enjoy cracking them open to "find" the meat, but washing everything down with a tall glass of iced tea or an ice cold beer. I don't think there is anything like it around (though I do love Lake Erie perch, but no need to crack anything to get to the 'meat').
BSoleille! The bright side of eating crabs, Maryland style (brown paper for table cloth and plenty of old bay and butter to go with)! Also, a couple rounds of corn hole is also a crowd pleaser for sure!
Terri 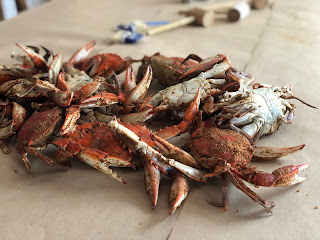 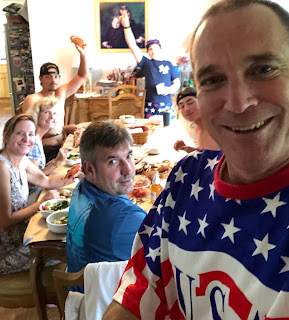 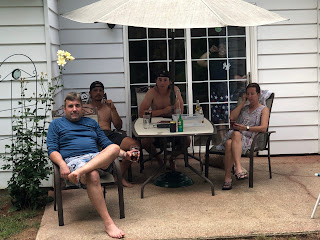 Posted by Terri Tomoff at 7:41 PM No comments:

A family visit from my sister Kimberly and family was just the ticket to kick off this holiday weekend despite COVID (we are all healthy). Sew...while the cousins slept in, the rest of us hit the parkway early this morning (high temps of of over 100 degrees later in the day) and glad we did to get in a quick 4 miler and the chance to eat a wee bit more than we would otherwise with all the "exercise."
So cheers to safe get togethers, grilled burgers and chicken and delicious sides (watermelon and strawberries) and anything else to make a great picnic!
BSoleille! The bright side of July 4th Weekend celebrations!
Terri
Posted by Terri Tomoff at 10:06 PM No comments: